by Sharon Henry
Surf-IoT
Comments are off

Developmental language disorder (DLD) – a condition that delays the mastery of language skills in children who have no hearing loss or other developmental delays – is one of the most common childhood disabilities of which most people have never heard.

It primarily affects phonology (the sound patterns of language), grammar, vocabulary and social skills, making it difficult for children to understand what others are saying, and a challenge to express their ideas and feelings.

“Children who have exposure to more than one language have higher risk for misidentification as DLD,” Not because the child is having difficulty mastering language, but rather they simple haven’t learned English yet, says Elizabeth Peña, professor in the School of Education.

Peña, a certified Speech-Language Pathologist, is also a faculty mentor in the current SURF-IoT program. She recently met with program fellows to share an overview of her SURF-IoT research project, “Evaluating the Feasibility of Conducting Language and Cognitive Assessments for Bilingual Children using Telepractice: A Validity Study.”

“A lot of my work has been in the development of measures that do a good job in differentiating DLD from typical development in a bilingual child,” Peña says.

Her work on test development for bilinguals has focused on assessment of semantic skills using a battery of related tasks. Because typical vocabulary tests rely on knowledge of specific vocabulary items, children from diverse cultural and linguistic backgrounds often perform below age expectations, possibly leading to misdiagnosis. The bilingual semantics test tasks are designed to allow responses that reflect cultural knowledge and allow children to respond in Spanish, English, or both, she explains. 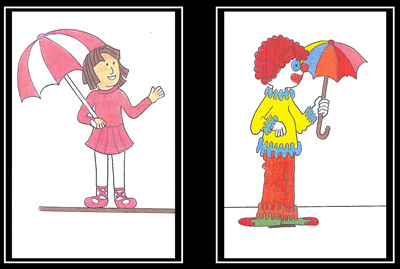 Tasks in Peña ‘s project include showing the image above and prompting a child by saying, “this is the girl and this is the girl’s umbrella. Here is the clown and this is?” The child is meant to finish the sentence with “clown’s umbrella.” “We want to hear that final possessive S,” she says. “Children that have developmental language disabilities have difficulties putting that in, either they don’t know the rule or they don’t hear it, or something is going on in their linguistic grammatical system where they can’t produce these grammatical markers.”

The final D sound in the word bed is the same as in past tense words, such as boiled. House includes the same S sound as plural words such as books. This task helps identify whether it is the sound of the letter or the marker that a child can’t produce. “We’re trying to make that distinction in our study,” Peña says.

The COVID pandemic has added challenges to an already problematic testing environment in schools.

The Individuals with Disabilities Education Act requires eligibility assessment to be completed within 60 days of referral. With so many students at home, many school districts have suspended much of the eligibility testing, putting schools at risk for being non-compliant of the law, she says.

“Another challenge is with kids who speak English as a second language,” she adds. Year-long delays in identification and testing have been documented in districts where there’s no tester who speaks a child’s home language.
“We don’t want to make it worse. If children need the intervention earlier that helps to close the gap,” she says.

Peña has proposed an equivalent study to demonstrate that an online assessment is as good as face-to-face assessment.

Her SURRF-IoT study will compare online and face-to-face administration of tasks and evaluate the reliability and consistency of speech-language pathologists, parents and researchers conducting the tests.

“A group of undergrads, graduate students, postdocs and faculty are working on this project together. I’m hoping that we end up with something that’s going to be usable for clinicians in my field,” she says.

SURF-IoT 2020 talk series is presented via ZOOM and open to the public. To view a schedule of future speakers and register for attendance, visit events.