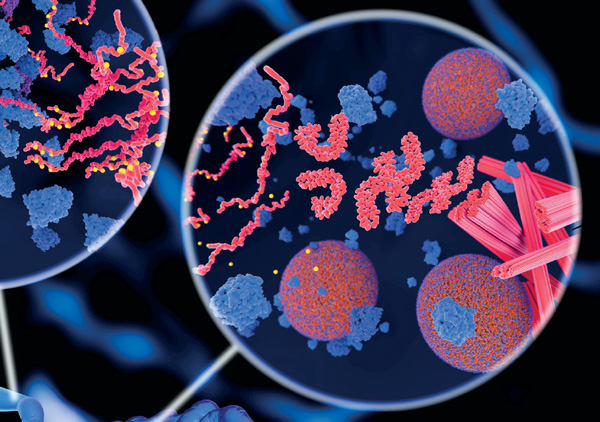 To better understand how proteins associate and aggregate, CALIT2 researcher Carter Butts and Rachel Marten, a UCI professor of chemistry, molecular biology and biochemistry, are developing computationally scalable techniques for modeling protein aggregation, and then connecting those models with experimental measurements.

Proteins, often called the workhorses of life, are the macromolecules in living cells that do the important job of keeping us alive and healthy. To function well in the human body, these molecular machines must come together in the right ways, at the right times and in the right numbers. However, that doesn’t always happen; sometimes protein aggregation, associated with the formation of numerous diseases, can cause harm.

To better understand how proteins associate and aggregate, CALIT2 researcher Carter Butts turned to the same methods he uses to analyze social networks. Butts, a professor of sociology with expertise in computational statistics and network analysis, joined Rachel Marten, UCI professor of chemistry, molecular biology and biochemistry, to integrate methods from across their disciplines. They are developing computationally scalable techniques for modeling protein aggregation, and then connecting those models with experimental measurements. The goal is to find new insights into the biology that lies behind some of the most serious chronic diseases affecting the country’s aging population, such as Alzheimer’s, Type 2 diabetes, cataracts and others.

According to Butts, in diseases such as Alzheimer’s or Lewy body dementia, proteins self-assemble into highly structured one-dimensional crystals, called amyloid fibrils, which the body is unable to break down. “Over many years, the proliferation of fibrils wreaks havoc on our brains and is ultimately lethal,” he says.

Likewise, in the environment of the eye lens, there is a finite store of special proteins that bend light and allow the eyes to focus. Over time, after exposure to ultraviolet light and other potential harms, the eye lens proteins eventually become damaged and can amass into ever larger molecular clumps. Those clumps result in cataract − the world’s leading cause of blindness. “But not all protein self-assembly is bad: many proteins, like the alpha-crystallins that round up misfolded proteins before they can cause harm, join together in myriad temporary arrangements as they perform their duties,” explains Butts.

So, what do proteins and social networks have in common? Like proteins, humans form complex structures of relationships that evolve over time, where the presence of one relationship can affect others. This dependence between relationships can drive the emergence of social cohesion, centralization and even group boundaries. “While the protein aggregation that leads to amyloid fibrils differs in many ways from the formation of project teams or high school cliques, we have shown that the same methods used to capture dependence in social networks can also be used to model the aggregation process,” says Butts, whose Networks, Computation and Social Dynamics Lab is located on the third floor of the CALIT2 Building.

His research includes both the creation of modeling techniques that can be used eﬀectively with existing experimental data, as well as the collection of new data to validate the modeling work. “This work will result in a collection of novel methods for the study of protein aggregation – the good, the bad, the ugly – that are both statistically principled and empirically grounded, as well as biologically relevant,” he says.

The project is being funded by the NIH, via a joint program between the NSF Division of Mathematical Sciences and the National Institute for General Medical Sciences to support advances in the mathematical and computational sciences that provide fundamental insights into health biology. It represents the next phase in a previous NSFfunded project that the two researchers conducted, which pioneered the use of network models for amyloid formation. The $1.8 million grant will be administered through CALIT2. As an interdisciplinary collaboration between researchers combining innovations from multiple sources, the project exemplifies the vision of CALIT2 as a catalyst that brings together researchers with distinct perspectives to address important problems. “It is a fascinating problem at a fundamental level, and it has such important consequences for health,” says Martin, who has been working on protein aggregation since 1999, investigating why some proteins are highly soluble, and others are not. “They are all made of the same building blocks, 20 amino acids, but some are much more prone to aggregation than others. I am very excited that this award will enable us to directly measure protein aggregation processes under different conditions and test the predictions our team made in earlier work.”

Butts and Martin hope that the project can substantially transform our ability to predict phenomena related to protein aggregation and model a wide range of protein interactions using a single formalism. This would help address the basic phenomenon of protein association and aggregation that underlies problems of immense social concern. “These include diseases such as Alzheimer’s, cataract, and Type 2 diabetes that are increasingly prevalent in our aging population, as well as economic costs and food security concerns related to prion diseases in cattle and other animals. Our research has the potential to inform the search for solutions to these serious societal problems, resulting in both economic savings and improvements in individual lives,” says Butts.

“Those diseases have serious economic costs, both because treatments are expensive and because of more indirect costs from people becoming disabled due to diabetes or going blind from cataract,” says Martin. “Alzheimer’s and Parkinson’s diseases are even worse, because they are so debilitating and because the underlying causes are still not well understood. I believe our approach to modeling network properties rather than structural properties is unique.”