The Environment: A Community-centric Approach

One of the dominant challenges for California’s future will be its changing climate, the result of human-induced alterations of natural landscapes and global climate disruption. The Scripps Institution of Oceanography has prepared 50-year forecasts for regional climate change throughout California. From these studies, it appears that there will be severe disruptions to water availability, growing threats from wildfires, and increased erosion, flooding and pollution of coastal regions. CALIT2 believes the digital transformation of monitoring and modeling the environment can provide solutions to these challenges. 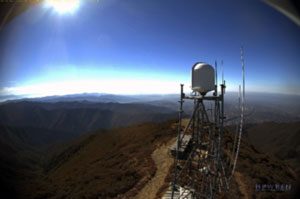 When a wildfire started in Orange County California’s Holy Jim Canyon last summer, a new ally
helped firefighters control it. High atop a nearby mountain known as Santiago Peak, six cameras
mounted on a Southern California Edison communication tower and connected to a long-range wireless network were broadcasting a continuous live feed of the surrounding area. Images updated every 10 seconds, and firefighters relied on those feeds to decode the fire’s origin, stay apprised of its progress and plan their containment strategy. The cameras and sensor technology were installed on the tower earlier this year as part of CALIT2’s multi-institutional HPWREN (High Performance Wireless Research and Education Network). Originally funded by the NSF, HPWREN originated from the institute’s UC San Diego division. In August, an HPWREN router was installed in the UCI CALIT2 Building, providing additional network access critical for expansion. In the coming year, the CALIT2 wireless network will extend out to at least four more HPWREN installation sites in Orange County. OC Fire Authority Chief Brian Norton expects HPWREN to aid firefighters in the area for years to come. A video wall is under construction in the agency’s Emergency Command Center to view cameras from all the sites as they come online. “As the network is built out across Southern California and beyond, the ability to provide real-time information will provide a significant benefit, not only to the fire community but equally important, to the public,” Norton says.

Environmental research, particularly in all areas related to water, is a major focus of UCI expertise. A few years ago, several leaders conducting water-related research found a new home in CALIT2. Brett Sanders, professor of civil and environmental engineering, is the principal investigator on several projects: the NSF-funded FloodRISE, the NOAA-funded SedRISE and the Blum Center for Policy Alleviation Flood Risk Initiative. Sanders moved his research team into CALIT2’s third floor, citing close alignment with CALIT2’s mission. The team’s highly interdisciplinary work brings together researchers from engineering and social ecology to leverage the power of information technology and behavioral sciences to advance the field of flood risk and disaster management. The researchers use advanced information technologies, namely flood simulation and visualization technology, and proven social science tools, such as surveys, focus groups and stakeholder meetings, to craft flood risk and environmental information that meets end-user needs for decision-making.