by Sharon Henry
NCSDL
Comments are off 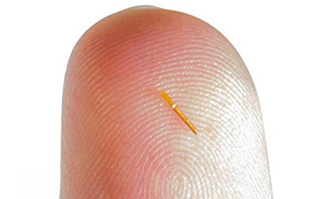 This implantable, zero-powered sensor, with a footprint smaller than a human eyelash, is designed for glaucoma monitoring and other applications.

Xidas’ founders are taking bets on which of their microdevice products will propel them into the big time.

The microengineering company was founded as Integra Devices in 2015 by Mark Bachman, Paul Dhillon and James Spoto. Renamed Xidas (next-generation integrated devices and systems), the startup company produces microelectromechanical systems (MEMS) products for use in industrial, medical and IoT applications.

Each of the company’s products is unique because it uses a novel method for development, an innovative manufacturing technology that is more cost-effective than silicon fabrication. Called Amaga™, the technique enables the miniaturization of devices and the integration of various materials (plastics, metals and ceramics) while allowing the components to be embedded in substrate or printed circuit boards. The approach is well-suited to meet the high-frequency, high-speed and high-performance demands of fifth-generation communication networks and the Internet of Things. The multi-patented method was developed by Bachman when he was an assistant professor at UCI, and G.P. Li, CALIT2 Irvine division director and professor of electrical engineering and computer science.

The startup company, a former CALIT2 TechPortal occupant, was established to commercialize this technology. Xidas has grown from one customer and four employees in its TechPortal days to 10 customers and over a dozen fulltime employees today. It signed a lease in March to double its space in an industrial park in Irvine, allowing the company to complement its research and development activities with in-house low-volume manufacturing.

Then the coronavirus pandemic hit, right as Xidas was at an inflection point. Bachman and Dhillon had secured Series A venture capital funding last year, and they were readying three products for market launch: a self-charging perpetual battery, a microrelay and a microforce sensor. All three devices are uniquely positioned with no competitors.

“We don’t develop a product unless we see a need for it in the marketplace or we have a big customer that specifically wants it,” says Bachman, Xidas chief technology officer, who was recognized by the Orange County Business Journal in 2019 as one of five Innovators of the Year.

“Everything we are making, no one has made before. It’s disruptive technology,” continues Dhillon, company CEO. Both Dhillon and Spoto are veteran high-tech industry entrepreneurs, with multiple successful startups under their belts. Spoto, now retired from Conexant Systems, serves as an adviser, while Dhillon heads up the business side of the company.

In addition to the three Xidas label products, the company also has developed a couple of products in partnership with industry. One is an in-body, zero-power wireless pressure sensor called the eyelash (with a footprint smaller than a human eyelash), designed for glaucoma monitoring. The other is a microfluidic inline pressure sensor, a small electromechanical-fluidic “smart” sensor for wearable drug delivery applications. Many more ideas are in the pipeline.

With Almaga as a broad technology platform for miniaturization, Xidas’ ideas for microscale solutions are abundant. The founders, however, are determined to stay focused on the products they can scale and that hold value in the marketplace.

Jeff Hilbert, a local MEMS technology product development entrepreneur who serves on the Xidas advisory board, says the company has made more progress, in less time and with less (dilutive) funding, than the majority of startups he has been involved with over the past 20 years. “They have been effective in forming value-added partnerships, identifying potential markets and products, getting prototypes developed, staying flexible and lean, and raising funds,” he says, adding, “They have a great team with a balance of expertise and experience. Arguably, the team is the most important factor in the early stages of a startup.”

The founders say they could not have reached this point without a strong interdisciplinary group that includes biomedical engineers, materials scientists, physicists, electrical engineers and mechanical engineers. Xidas also regularly hires interns from UCI, Cal State Fullerton and local community colleges as well.

The company has quadrupled in size since its TechPortal days. After spending several years in incubator space EvoNexus, the burgeoning team and its equipment moved a year ago to its current location, 46 Waterworks Way, in Irvine. With a clean room and rapid prototyping equipment, including a computer numerical control machine, wire bonder, 3D printers and more, they’re able to try out new ideas right away.

Although the company has moved on physically, its ties to CALIT2 remain strong. “It all started at CALIT2,” says Bachman, referring to the technology that came out of research conducted at UCI. “A lot of the reputation we enjoyed came out of our affiliation with CALIT2. And we still use some of the UCI clean rooms and microscopy equipment, but it is the intellectual relationship that benefits us the most. I still talk to G.P., faculty, postdocs and staff researchers at CALIT2. It’s the kind of invaluable interaction that stimulates and creates ideas.”

Hilbert says Xidas is at a crucial point. “Like many startups, I believe Xidas is now at the stage where they need to focus on driving a lead product into the market and starting to grow their revenue base,” says Hilbert. “Often the difference between winning and losing is understanding when to be on which side of that line.”

Being able to quickly adapt to a changing environment is one of the advantages of being a small business. “Despite the COVID-19 pandemic, we are very excited about where we are going with Xidas and the opportunities we have before us,” says Bachman. “We’re doubling our efforts and focusing on near-term revenue opportunities, while still building out our R&D and manufacturing capabilities. We’re planning to come through this even stronger and better than before.”